Open-access and Copyright:
©2015 Koster RA et al. This article is an open access article distributed under the terms of the Creative Commons Attribution License (CC-BY) which permits any use, distribution, and reproduction in any medium, provided the original author(s) and source are credited.

One of the main advantages of DBS sampling is that it allows the patient to sample at home and send the DBS sample to the laboratory by mail [1-4]. This sampling is considered to be patient friendly because it is less invasive and saves patients transportation costs and time. DBS sampling also has a lower biohazard risk and requires a smaller amount of blood than venous sampling [2,4]. Solid organ transplant recipients are required to use a lifetime of immunosuppressant medications like tacrolimus (TaC), sirolimus (SiR), everolimus (EvE) and cyclosporin A (CyA) to prevent allograft rejection. Bioanalysis and Therapeutic Drug Monitoring of these drugs are necessary because efficacy and toxicity is associated with blood concentrations and/or pharmacokinetic parameters. Therefore, these patients could greatly benefit from immunosuppressant DBS analysis. Since the use of dried blood spot (DBS) analysis for therapeutic drug monitoring (TDM), more extensive validation procedures have been proposed in order to improve the quality of the analysis results. Variations of the hematocrit value, spot volume and DBS stability are among the parameters that should be investigated during method validation [1,5]. A perhaps unappreciated source of variability may be the drying time of a dried blood spot sample. After collection of the blood on the DBS card it should be dried dried at ambient temperature. It is already suggested by the European Bioanalysis Forum (EBF) that the required drying time may be influenced by the hematocrit (HT) and that this may affect the robustness and reproducibility of the assay [5]. Consequently it is recommended to investigate these parameters as part of the validation [5]. Although the DBS may appear dry after 3 hours, the extraction recoveries of the substances within the DBS could still suffer from further drying effects after those 3 hours. This could especially be the case when substance binding to the DBS card matrix by the hydrogen bond acceptors of the substance with the hydrogen groups in the cellulose of the DBS cards is suspected [6-8]. Despite this recommendation, many publications describe a drying time of 2 to 3 hours without presenting data to support this period. The most recent review of DBS validation procedures also noted that none of 68 reports included in the review described the effect of aging on the recovery [9].
The objective of this study was to investigate the influence of the drying time of the DBS on the recoveries for the immunosuppressants TaC, SiR, EvE, CyA and their structural analogues ascomycin (AsC) and temsirolimus (TeM).

TaC was purchased from USP (Rockville, MA, USA). EvE was purchased from Sigma-Aldrich Inc. (St. Louis, USA). SiR was purchased from Dr. Ehrenstorfer GmbH (Augsburg, Germany) and CyA was purchased from EDQM (Strasbourg, France). AsC was purchased from LC Laboratories (Woburn, USA). TeM was purchased from Sigma-Aldrich Chemie GmbH (Buchs, Switzerland). Combined stock solutions containing TaC, EvE, SiR, AsC and TeM were prepared at 2500 ng/mL in methanol and CyA at 50.000 ng/mL. The following isotopically labelled internal standards (IS) were purchased from Alsachim (Illkirch Graffenstaden, France): TaC [13C,2H2], EvE [13C2,2H4] and CyA [2H12]. The extraction solution consisted of methanol:water (80:20 v/v%) and contained the isotopically labelled IS TaC [13C,2H2], EvE [13C2,2H4] and CyA [2H12] at concentrations of 2.5 ng/mL, 1.0 ng/mL and 10 ng/mL respectively. TaC [13C,2H2] was used as IS for TaC and AsC. EvE [13C2,2H4] was used as IS for EvE, SiR and TeM. And CyA [2H12] was used as IS for CyA. Previous research showed that some isotopically labelled IS were contaminated with one of the immunosuppressants [6]. TaC [13C,2H2] was 1.1% contaminated with TaC, SiR [13C,2H3] was 2.9% contaminated with SiR, EvE [13C2,2H4] was 0.5% contaminated with EvE and was 0.7% contaminated with SiR. For this reason it was decided to use EvE [13C2,2H4] as the internal standard for SiR and TeM. Low concentrations of the IS were used to minimize the effect of the contaminants, while still providing high and reliable peak areas. Citrate whole blood was purchased from Sanquin (Amsterdam, The Netherlands). The whole blood was stored at 4°C and was used within two weeks after blood donation. To assure the quality of the blood, it was checked for hemolysis prior to use. This was performed by carefully tumble mixing the stored blood tube, followed by 2 minutes centrifugation at 2000 x g and visual inspection of possible hemolyis of the plasma.
Whatman FTA DMPK-C cards (Kent, UK), which are not impregnated with chemicals, were used for the DBS analysis. A XN9000 hematology analyzer from Sysmex (Hyogo, Japan) was used for all hematocrit analyses. All experiments were performed on an Agilent 6460A (Santa Clara, Ca, USA) triple quadrupole LC-MS/MS system, with an Agilent 1290 series combined LC system. All technical parameters were used as described by Koster et al [6]. All precursor ions, product ions, optimum fragmentor voltages and collision energy values were tuned and optimized in the authors’ laboratory and are shown in Table 1. Agilent Masshunter software for quantitative analysis (version B.04.00) was used for quantification of the analysis results.

The preparation of the different target hematocrit values was by centrifuging tubes of citrate whole blood with a known HT (measured by a Sysmex XN-9000 analyzer) for 5 minutes at 1972 x g. The necessary volumes of plasma were omitted or added to achieve the target HT values [10]. The prepared HT values were always measured with the Sysmex XN-9000 analyzer in order to confirm the correct HT preparation.
The sample preparation was performed according to a previously published method, which makes use of partial spot analysis [6]. For the preparation of the DBS samples an 8 mm disk was punched into an eppendorf tube. For recovery testing the DBS card was first punched into an eppendorf tube, followed by the addition of 15 µL spiked or blank blood onto the DBS card punch in five-fold for each HT value and concentration. In this way, full spot punches were obtained for this research. The spots were air dried at ambient temperature. After addition of 200 µL extraction solution the samples were vortexed for 60 sec, sonicated for 15 min and then vortexed again for 60 sec. The extract was transferred into a 200 µL glass insert and placed at -20°C for 10 min to improve protein precipitation. After centrifugation at 10000 x g for 5 min, 20 µL of the extract was injected to the LC-MS/MS system.

Since recoveries could be negatively affected by lower HT values, combined with high concentrations [6-8], blood with HT values of 0.10, 0.20, 0.30, 0.40 0.50 and 0.60 L/L were spiked at 100 ng/mL for TaC, SiR, EvE, AsC and TeM and at 2000 ng/mL for CyA.
After the DBS preparation, the spots were dried for 3, 24 and 48 hours at ambient temperature, directly followed by processing and analysis (solutions A). For the extraction recovery, extracts of blank DBS were spiked at the tested concentrations (solutions B). The average peak area ratios of the substance with its internal standard were used to calculate the recovery. The calculation of the percentage recovery was as followed: recovery = A/B x 100%. 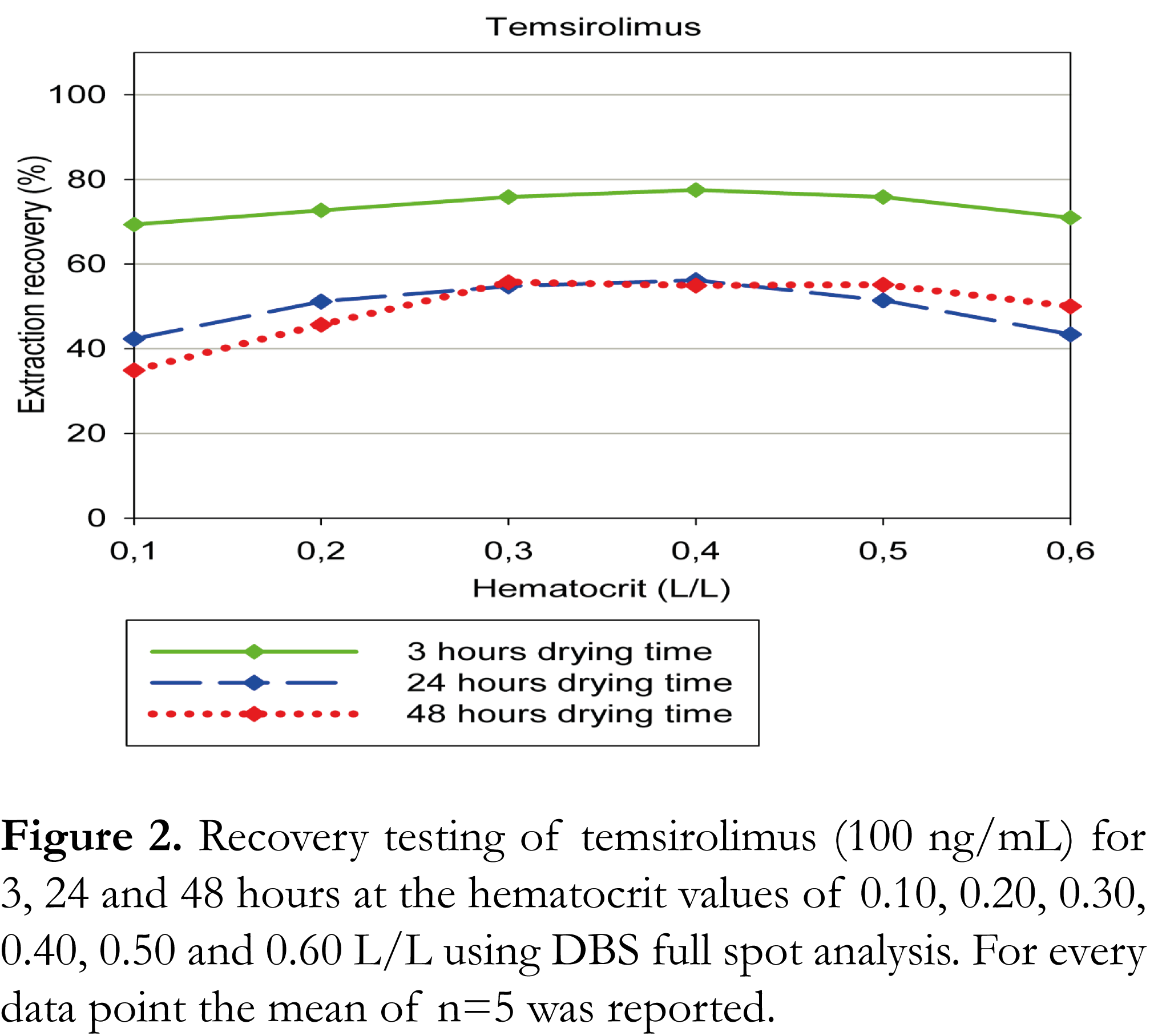 This study showed that the DBS drying time could have a significant influence on analyte recovery of SiR, EvE, TeM and CyA. For SiR, EvE and TeM, the drying time effect is also influenced by the HT of the blood, where lower HT values cause lower recoveries. It is clear that the DBS drying time is not yet acknowledged as a possible factor of influence in DBS analysis, since a recent review did not include the DBS drying time in their recommended validation practices [9]. A 3 hour DBS drying time is not recommended for SiR, EvE, TeM and CyA and a drying time of at least 24 hours is advised in order to minimize the risk on drying time related recovery effects for the compounds tested in this study. As a future perspective, DBS drying time effects should be investigated for a period of at least 48 hours during future method development and validation. Furthermore, the method validation should include a framework for the HT and substance concentration in which the results are within acceptable limits. Patient samples that are transported by mail will be allowed to dry sufficiently in a sealed bag with a silica sachet. However, the use of prepared standard and control samples that have not been dried sufficiently may introduce a significant bias during analysis of patient samples.