Open-access and Copyright:
©2015 Indapurkar AS et al. This article is an open access article distributed under the terms of the Creative Commons Attribution License (CC-BY) which permits any use, distribution, and reproduction in any medium, provided the original author(s) and source are credited.

Butyrylcholinesterase (BuChE) is a biomarker of organophosphate (OP) poisoning and can be used as a diagnostic marker to measure exposure to OP compounds. The purpose of this study was to develop a method to extract BuChE from human plasma. BuChE was extracted from plasma using the NAb protein-G Agarose Spin Kit. Factors affecting extraction like incubation time, plasma volume and cross-linking of antibodies to agarose beads were evaluated. All samples were analyzed for BuChE activity using the Ellman’s assay. The incubation times of plasma and anti-BuChE antibodies marginally affected the extraction efficiency of BuChE whereas a decrease in plasma volume increased the extraction efficiency. Cross-linking of anti-BuChE antibodies on agarose increased the extraction efficiency. The NAb protein-G Spin Kit can be used successfully to extract BuChE from human plasma. This extraction technique may be coupled to downstream analytical analyses for diagnosing exposure to OP compounds.

Organophosphorus (OP) compounds are used as warfare agents, insecticides, pesticides and anti-wear agents [1–4]. OP compounds covalently bind to serine esterase enzymes like acetylcholinesterase (AChE), butyrylcholinesterase (BuChE) and carboxylesterase and inhibit them irreversibly.[1] BuChE is used as a preferred biomarker for the detection of OP poisoning because of its ability to adduct to broad range of OP compounds and long half-life of 16 days [2–7]. Here, we have evaluated a new, more rapid and universally accessible method to extract BuChE from human plasma using protein-G agarose spin columns. Incorporation of this extraction technique into a diagnostic protocol of OP compound exposure will reduce costs, enable universal access to the method, and reduce the time needed to analyze blood specimens.

Refinement of this new method involves evaluation of three factors: incubation time, plasma volume and crosslinking of anti-BuChE antibodies. Effect of incubation time of the antibodies and the plasma on extraction was determined by incubating antibodies and plasma with agarose beads at room temperature with end-over-end mixing for 30, 45 and 60 min. 500 µL of the antibody solution (20 µg of anti-BuChE antibody to 480 μL PBS) was incubated followed by incubation of 500 µL of the plasma.
Effect of plasma volume on extraction was determined by incubating different volumes of human plasma (50, 75, 100 and 500 µL) with antibody-conjugated columns for 45 minutes. Effects of crosslinking of antibodies on extraction were determined by crosslinking the antibodies on agarose beads using dimethylpimelimidate in triethanolamine buffer (5.4 g/L) at room temperature for 30 minutes followed by incubation with 100 µL of plasma at room temperature with end-over-end mixing for 45 min. For all the experiments, antibody-BuChE conjugates were eluted three times using elution buffer. The columns were regenerated four times using elution and binding buffer. All samples were collected by centrifuging the column at 4500 rpm (1358 x g). Samples collected were analyzed using the Ellman’s assay. The absorbance was measured at 405 nm and readings were taken every minute for 15 minutes using a Cytation 3 Imaging Reader, Biotek Instruments Inc. (Winooski, Vermont) [8].  All statistical analyses were performed using Microsoft Excel (Redmond, Washington).
The effect of incubation times on the percent activity of BuChE extracted from human plasma is shown in Figure 1. 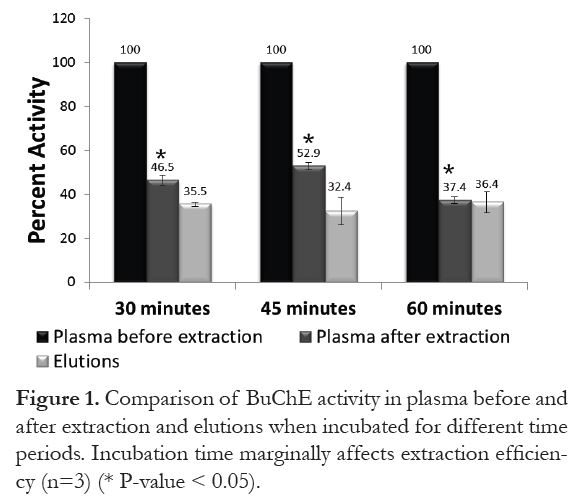 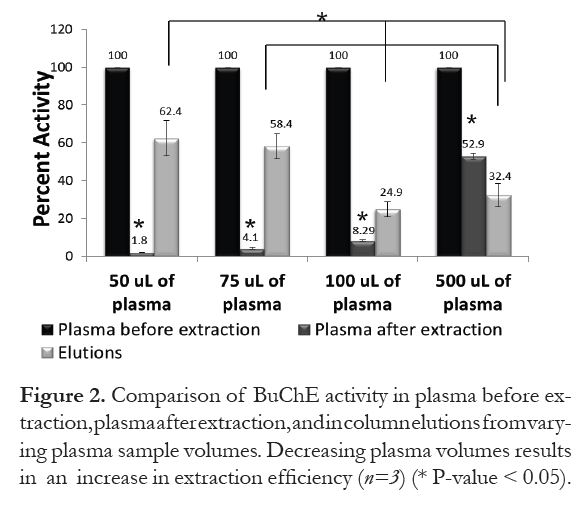 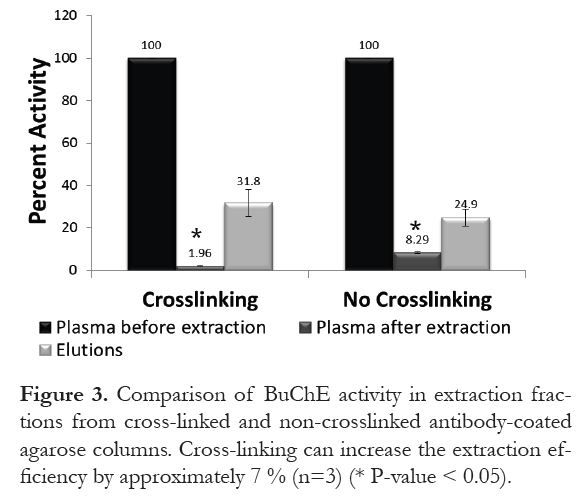 Here, a new method for extracting BuChE from plasma using protein G agarose spin columns was demonstrated and refined. The use of agarose beads to extract BuChE for diagnostic purposes is feasible and can reduce the cost-per-sample for analysis while making extraction of BuChE feasible for laboratories. However, the extracted samples will require further digestion and analysis by an HPLC-MS/MS method which is currently being developed. The extraction and analytical methods will then be validated. Future studies will be directed at coupling this extraction with downstream analysis for the development of a complete diagnostic method.