Open-access and Copyright:
©2017 Panderi I et al. This article is an open access article distributed under the terms of the Creative Commons Attribution License (CC-BY) which permits any use, distribution, and reproduction in any medium, provided the original author(s) and source are credited.

MALDI IMS datasets comprise huge amounts of spectra and their interpretation requires the use of multivariate statistical methods. MALDI IMS spectral data have been processed using sequential principal component analysis and 2-D peak distribution tests so as to investigate the molecular differentiation of tumor regions in formalin-fixed paraffin-embedded tissue biopsies of colorectal adenocarcinoma. In some of the cases fresh frozen tissue section samples were also analyzed for comparison. Multivariate analysis of spectral data revealed a specific pattern of mass ion peaks in different tumor regions that were distinguishable from the adjacent normal regions within a given specimen. Moreover, similar mass ion peaks could be detected in both FFPE and fresh-frozen tissue section samples. These significant mass ion peaks have been used to generate ion images and visualize the difference between tumor and normal regions. These specific and statistically significant ion peaks may serve as potential biomarkers for colorectal adenocarcinoma.

The tissue samples were taken from patients who had been diagnosed with colorectal cancer and who were undergoing definitive surgical resection of the primary tumor, according to the standard local therapeutic protocol. Tissues samples were collected, both from the adenocarcinoma tumor, and from non-affected areas of the colon. Hematoxylin and eosin staining of tissues, evaluation of pathology and formalin fixed paraffin embedded (FFPE) preparation were all performed by board certified surgical pathologists. The pathologist microscopically demarcated areas in the stained tissue that histologically appeared consistent with carcinoma cells and un-affected areas. A portion of the resected tissue tumor and normal did not undergo paraffin fixation. The unfixed samples were prepared by snap-freezing in liquid nitrogen. These samples were stored at -80ºC until the analysis.
Fresh-frozen tissue samples were cryosectioned at a thickness of 7 μm and placed directly onto ITO (Indium Tin Oxide) one-side coated conductive glass slides using a Leica CM3050 S cryostat operated at -25ºC. Each slide contained one tumor and one normal section. Tissue samples were dried under vacuum for 60 min then washed twice in 70 % and 100% ethanol, respectively for 0.5 min. Samples were then stained with 0.25% w/v toluidine blue for 0.5 min and subjected to additional drying under vacuum for 30 min. Slides were scanned to document the position of the tissue. Three orientation points were set near the tissue sections. The remainder of the resected specimen underwent fixation for preservation and storage. FFPE samples were fixed in 10% buffered formalin for 24 h, at room temperature, dehydrated with ethanol and paraffin-embedded according to the standard local protocol.
FFPE samples were cut into 7μm tissue sections using a Leica RM2125RT microtome operated at room temperature. Tissue section FFPE samples (one tumor and one normal section per slide) were then applied onto ITO one-side coated, conductive glass slides and kept at 60ºC overnight to facilitate adhesion of the section to the target. The paraffin was removed with xylene washes twice for 20 min each before hydration with graded ethanol washes (100% EtOH, 1×10 min; 95 % EtOH for 5 min; 80 % EtOH for 5 min, and 70 % EtOH for 10 min). After fully drying for one hour in an oven at 65oC, the samples were immerged into a pre-heated steamer containing Tris-EDTA buffer pH = 8.4 at 95ºC for 40 min. After cooling at room temperature for 20 minutes the samples were rinsed once with PBS Tween 20 for 10 min, and twice with distilled water for 5 min each. A 0.5 % toluidine blue solution was then applied for 1 min. The samples were dried under vacuum for 30 min before matrix application.

Eight colorectal adenocarcinoma cases that were stored for 9 to 16 months after FFPE procedure were analyzed using MALDI IMS and data were compared to normal areas of the same tissue stored under the same fixation procedure. Fresh frozen samples of tumor and normal areas were also analyzed for comparison. Information of the patients’ tissue section samples with colorectal cancer analyzed by MALDI IMS is presented in Table 1. A schematic diagram of the analyzed colorectal adenocarcinoma cases is presented in Figure 1.
Spectra were collected across selected tissue areas that were arbitrarily selected within the regions that the pathologist defined as tumor and normal, using the Ultraflex III MALDI-TOF/TOF instrument (Bruker Daltonics) with a SmartBeam laser operating at 100 Hz in linear positive mode over a mass range of m/z 2000 to 20000. A laser spot diameter of 100 μm and a raster width of 100 μm were used. Using the FlexImaging software (Bruker Daltonics), orientation points were generated to ensure the correct positioning of the laser for spectral acquisition. The software exported the specific geometry of the tissue to be analyzed, and an instrument-specific automated method was created, which generates a grid across the tissue of spots upon which data were acquired. Calibration was done externally using a protein standard mixture in the mass range of m/z 3000 to 16500. The intensity of each scan, over the entire mass range acquired, was mapped on to the tissue section image, allowing the visualization of the location of each m/z detected. These images were generated and visualized using FlexImaging software.

In this work FlexImaging software was used to compare the different MS spectra macroscopically. The spectra were then imported into the ClinProTools software for post-processing and generation of proteomic profiles. A resolution of 800 was applied to the peak detection method. The Convex Hull baseline with a flatness value of 0.8 was selected for baseline subtraction. Savitsky Golay algorithm was applied with a width of 2 m/z in 5 cycles for spectral smoothing. Null spectra exclusion filter was enabled with a noise threshold of 2, to exclude spectra with no data or extremely low intensities. Mass recalibration was not performed. PCA Analysis was managed by an external MATLAB software tool, which is integrated in ClinProTools. This software calculates p-values for the mass ion peaks of tumor and normal regions. The peak of the lowest p-values was selected as the best discriminatory marker as a low p-value describes the importance of a single peak in a group. The 2D Peak Distribution view displays the distribution of two selected peaks in the non-excluded spectra of the loaded model generation classes. The peak numbers and m/z values are indicated on the x- and y-axes. The signal pattern of molecular ions was acquired from tumor and healthy regions and only peaks with p-values less than 0.05 by one-way ANOVA were selected for evaluation. 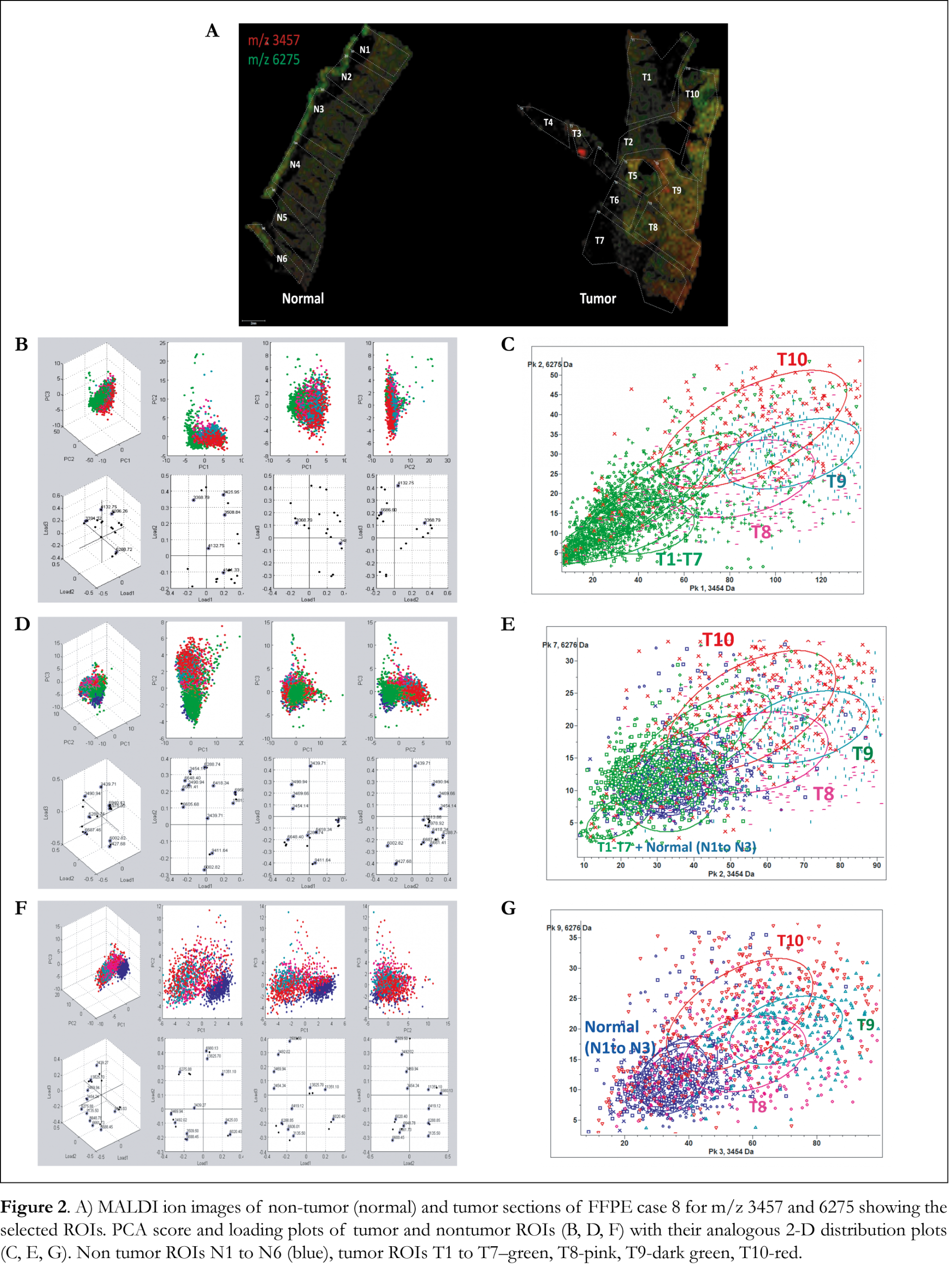 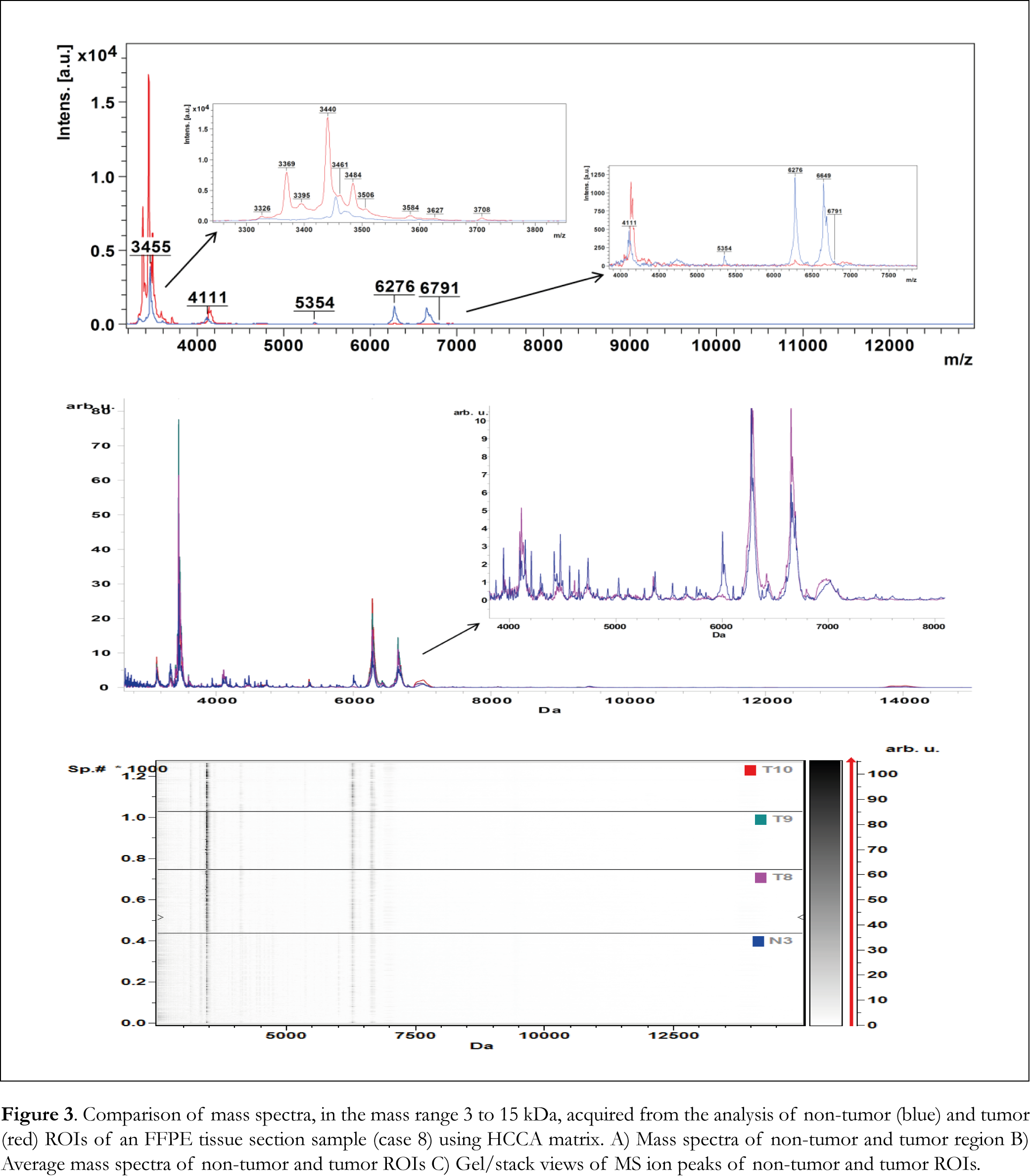 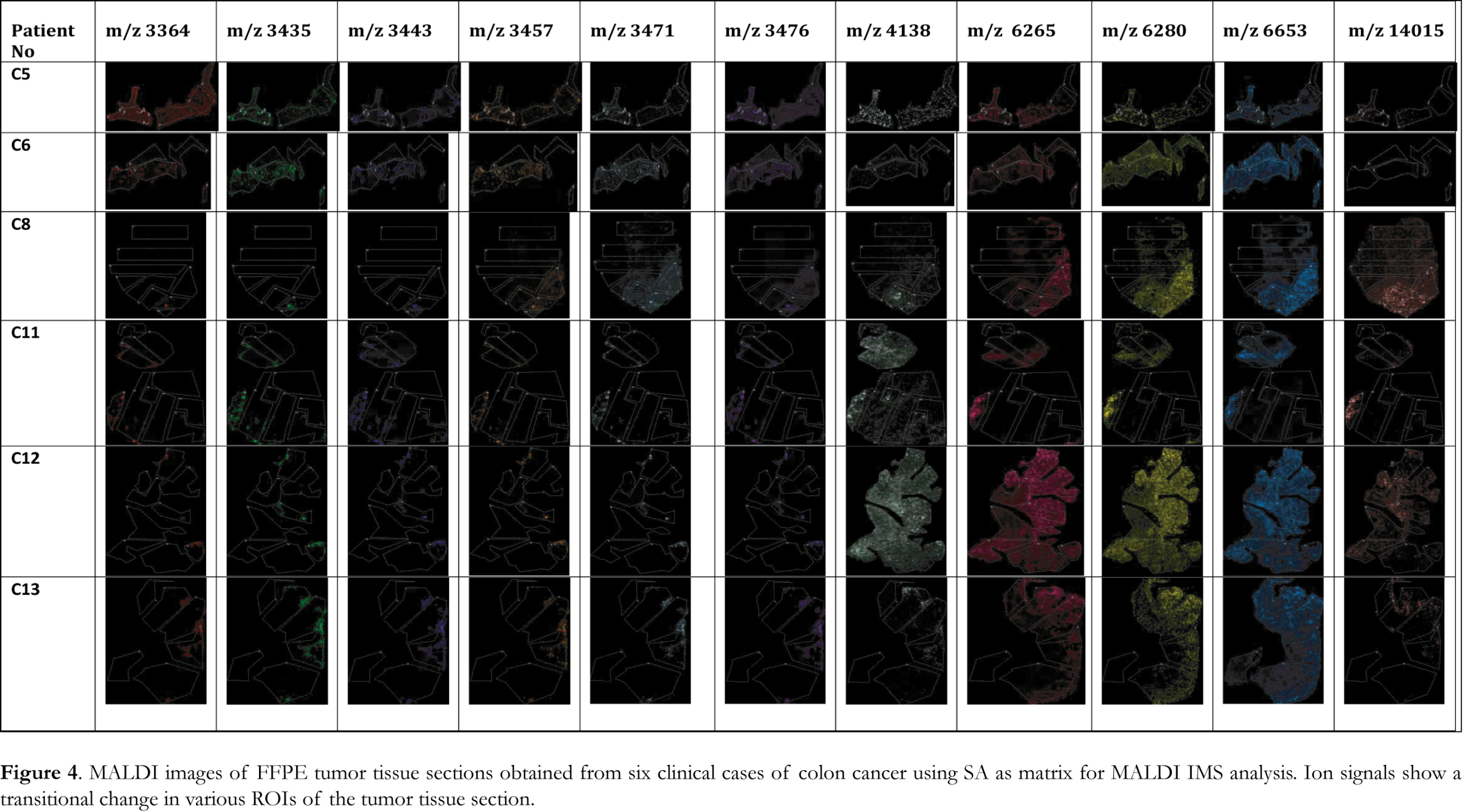 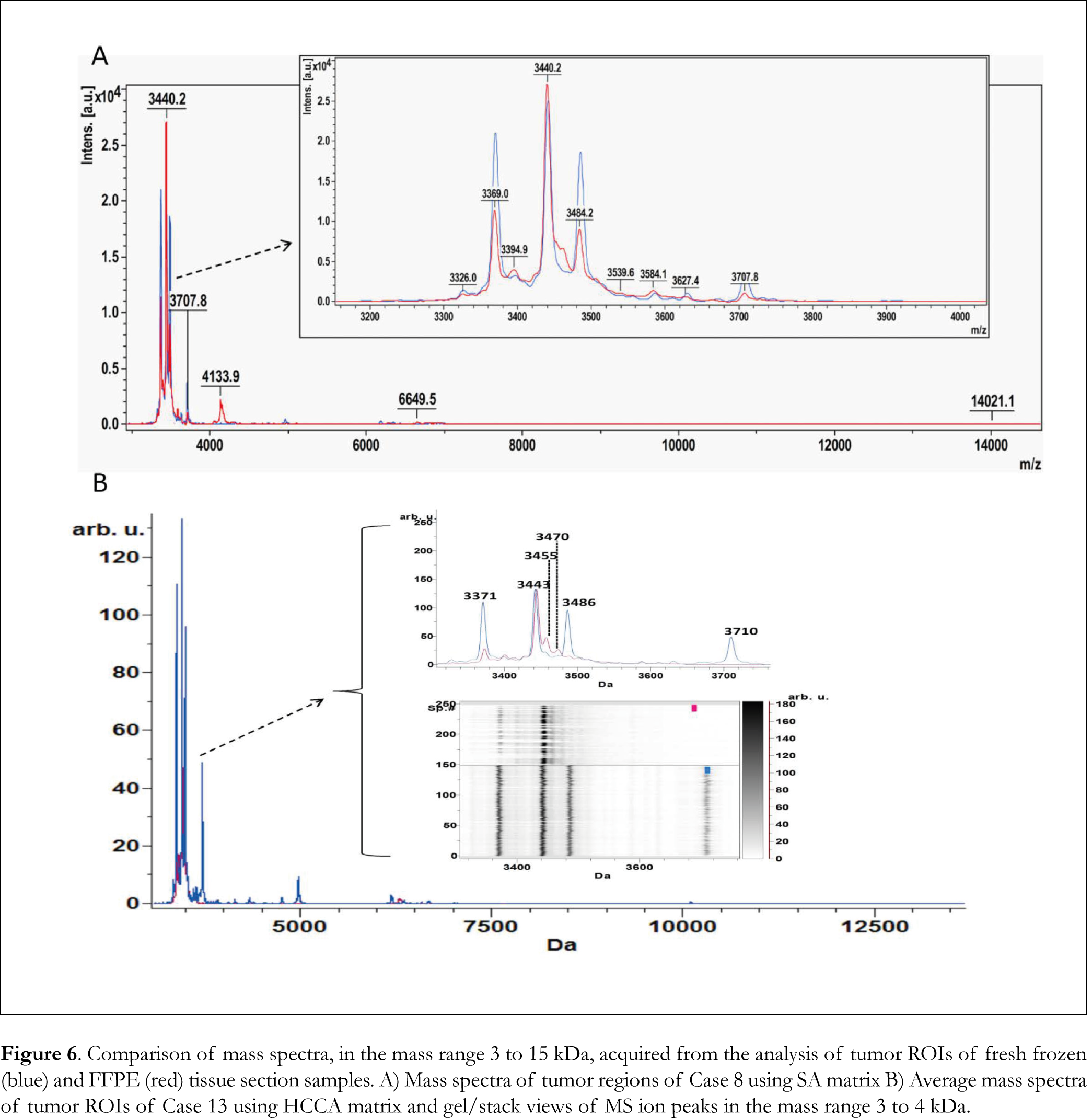 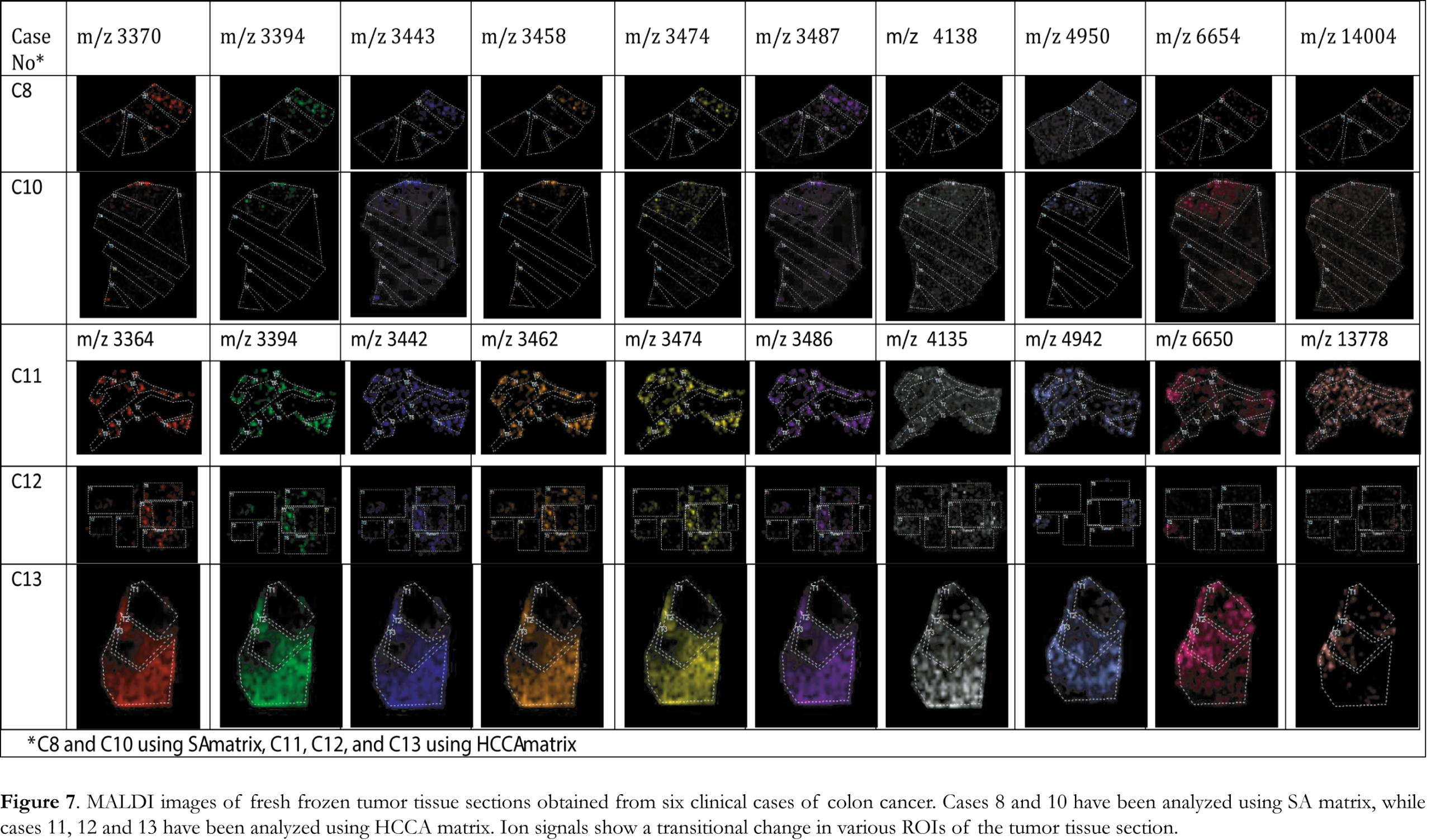 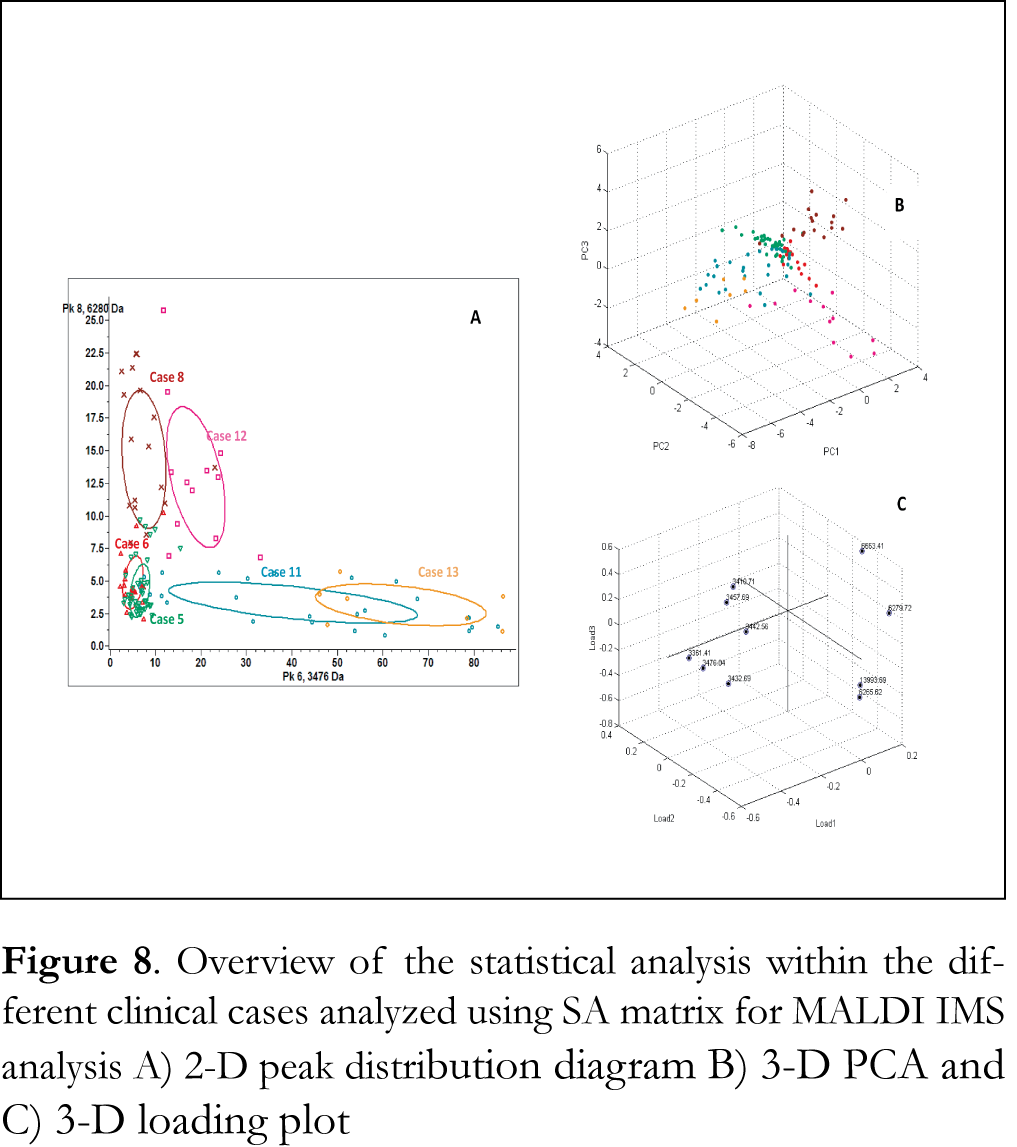 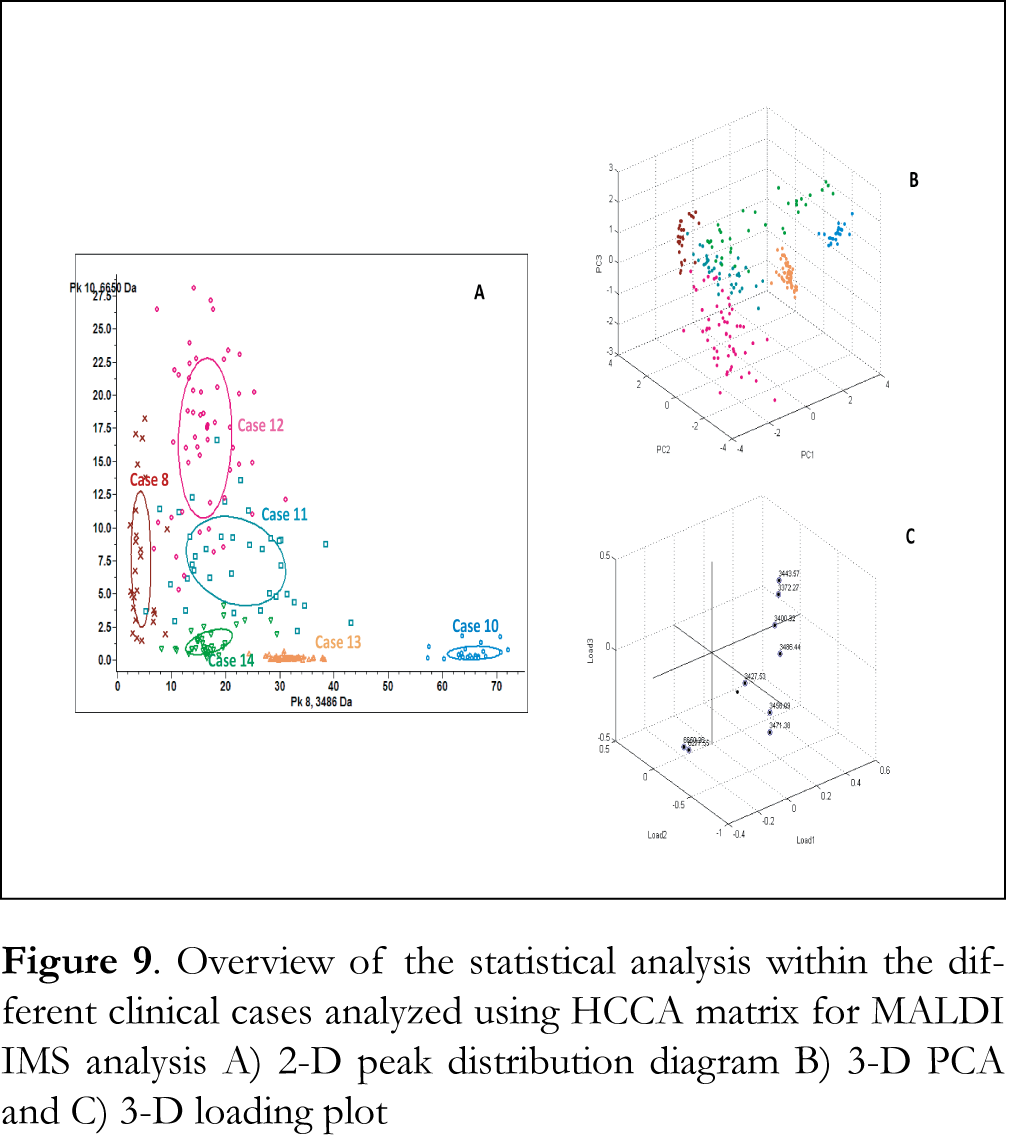 The MALDI IMS technique employed in this study demonstrates the ability to effectively analyze FFPE and fresh frozen colorectal adenocarcinoma tissue section samples. The results are reproducible among the different cases, independent of the storage condition of the tissue, fresh frozen or FFPE. Thus, the HIAR procedure was successful at unlocking the biomolecular profile of FFPE colorectal adenocarcinoma tissues. Additionally, MALDI IMS analysis yielded similar mass ion peaks from both matrices (SA and HCCA) however HCCA seems to be better for the visualization of the tumor ROIs.
Furthermore, multivariate analysis of MALDI IMS spectral data revealed a series of mass ion peaks that allowed for the visualization of tumor ROIs and more importantly the ability to differentiate between tumor and normal ROIs in both FFPE and fresh frozen colon tissue biopsies. PCA analysis also yielded a specific pattern of mass ion peaks in different tumor regions that were distinguishable from the adjacent normal regions within a given specimen. Interestingly, all of the analyzed samples, independent of the storage conditions, were found to have a similar pattern of mass ion peaks overexpressed in tumor ROIs. The identification of the mass ion peaks responsible for the tissue heterogeneity within a colorectal adenocarcinoma specimen is of potential therapeutic interest and might play a key role to the understanding of the etiology of the disease.
Our findings are in accordance with some of the MALDI IMS data presented in other studies. In MALDI image-guided proteomic studies in fresh frozen section samples of primary colon tissues with and without lymph node metastasis, Walch and coworkers found a panel of ten significantly discriminating mass ion peaks [65]. Among which, the ion peaks at m/z 6277 and 6649 correlates with significantly discriminating ion peaks that we detected in FFPE tumor tissues at m/z 6280 and 6653 using SA matrix and at m/z 6277 and 6650 using HCCA matrix. In addition, the mass ion peak at m/z 6649 also correlates with our data in fresh frozen colon tissues where an ion peak at m/z 6653 was among the significantly discriminating peaks using SA matrix and an ion peak at m/z 6649 was among the significantly discriminating peaks using HCCA matrix.
It should be noted that mass differences between publications can be either explained by pre-analytical molecular changes, low-quality data acquisition, different biological matrix used for the analysis or closely related quasi molecular ions due to reactions during sample preparation, adduct ion formation or the loss of smaller functional groups.
The above results demonstrate that the described multivariate data analysis is able to reveal tumor heterogeneity in both FFPE and fresh frozen colorectal adenocarcinoma biopsies. However, MALDI IMS technique is nearly impossible to directly detect high molecular mass biomarkers, with molecular mass greater than 25 kDa, that are currently used in clinical cancer research. A number of reports have shown a correlation between the cysteine protease activities and tumor development in human colorectal cancer [66,67]. The deregulation of this proteolytic activity in tumor may be responsible for the formation of the low molecular mass proteins or peptide fragments detected. Therefore the mass ion peaks detected in this study might represent unknown proteins of low molecular weight or fragments of peptides or proteins with high molecular mass which are up-regulated in colorectal adenocarcinoma and may play a role in signaling pathways of this disease.

The development of protein biomarkers in colorectal cancer not only provides potentially useful clinical tools but it also represents a rich source of information through which researchers can gain a better understanding of the development, progression, and possible metastasis of this disease. Nowadays, tumor microenvironment profiling approaches are gaining increasing attention in cancer research and clinical cancer care mainly focuses on “targeted therapy”. The problem of tumor genetic heterogeneity is known to be a barrier to the development of effective targeted therapies. However, heterogeneity at the protein level in tumors has been less well studied [68]. Our findings highlight the degree of tumor heterogeneity inherent in colon cancer biopsies. The significant mass ion peaks detected through this work can differentiate between tumor and normal regions and their identification may provide insight into new important therapeutic targets. This study provides evidence in support of the clinical utility of MALDI IMS which is able to annotate tissues based solely on the detected MS profiles and thereby differentiate regions that are not distinct using established histopathological tools but which are characterized by different MS signatures. This ability to effectively define tumor regions by molecular profiling at high resolution will provide a greater understanding of molecular mechanisms of tumor heterogeneity and warrants further studies for the identification of the most significant peaks.

Reporting Analytical Data for Regulatory Submissions: A CRO Perspective on Implementing the BP4NTA Study Reporting Tool in the Healthcare Industry

Evaluation of Extraction Conditions for Volatile Extractables from Polypropylene, PBT Resins, and Chlorobutyl Rubber Elastomers Using a Variety of Solvents and Extraction Techniques