Open-access and Copyright:
©2021 Vijayakumar A et al. This article is an open-access article distributed under the terms of the Creative Commons Attribution License (CC-BY) which permits any use, distribution, and reproduction in any medium, provided the original author(s) and source are credited.

OBJECTIVE: A high-performance liquid chromatography method for the estimation of Linezolid in human plasma was developed and validated.

METHODS: Samples (100 µL) were deproteinized with acetonitrile and analyzed using LiChrospher 100, RP18e column with PDA detection at 254 nm. The flow rate of the isocratic mobile phase comprising of 0.1% formic acid in 1000 ml of water and acetonitrile in the ratio of 60:40 (v/v) was set at 1.0 ml/min.

RESULTS: The calibration curve ranged from 0.50 to 20.0 µg/ml and was linear. The recovery ranged from 96% to 101%. The accuracy ranged from 98 to 101% and intra- and inter-day relative standard deviation was <4.58%. The method reliably eliminated interfering materials from plasma and R2 was 0.9973. The method described was applied to the determination of plasma LZD concentration in multi-drug-resistant tuberculosis patients who are treated with a dose of 600 mg LZD once daily.

CONCLUSIONS: The developed method is suitable for determination of plasma LZD in routine care and considered feasible in less-resourced settings.

Drug-resistant tuberculosis (TB) continues to be a public health threat. Worldwide in 2019, close to half a million people developed rifampicin-resistant TB (RR-TB), of which 78% had multidrug-resistant TB (MDR-TB). The three countries with the largest share of the global burden were India (27%), China (14%), and the Russian Federation (8%) [1]. Development of MDR TB could be due to a variety of reasons including microbial, clinical, or programmatic issues. According to the drug-resistance survey report, in India 2014–2016, 28% of patients with TB have resistance to any anti-tubercular drugs and 6.2% have MDR-TB; among MDR-TB, 21.8% have pre-extremely drug-resistant (XDR-TB) and 1.3% have XDR-TB [2]. Pre-XDR TB is caused by Mycobacterium tuberculosis (M. tuberculosis) strains that fulfill the definition of MDR/RR-TB and which are also resistant to any fluoroquinolone. Preferably a treatment regimen for MDR-TB consists of WHO Group A category drugs including linezolid (LZD), bedaquiline, and fluoroquinolone (levofloxacin or moxifloxacin). Group A drugs are considered to be highly effective against MDR-TB. The treatment regimen is completed with WHO Group B drugs, i.e. clofazimine and cycloserine (or terizidone) [3].
Linezolid, an oxazolidinone antibiotic that binds to the 50S ribosomal subunit inhibiting protein synthesis, is a repurposed drug as it was originally developed for infections caused by susceptible Gram-positive bacteria like community-acquired pneumonia or skin and soft tissue infections [4]. After proven in vitro activity against Mycobacterium tuberculosis [5] it has been increasingly used for MDR-TB treatment and has been associated with good treatment outcomes. Success rates of 68% up to 82% encourage physicians to use these drugs as part of routine care [6,7]. However, prolonged use, beyond the licensed treatment duration of 28 days, has shown that the drug is not well tolerated, and severe adverse effects occur frequently and include anemia, neuropathy, and lactic acidosis prompting cessation of treatment [8]. To reduce toxicity therapeutic drug monitoring (TDM) has been recommended in international guidelines [9,10]. Trough concentrations exceeding 8 mg/l are associated with toxicity [11] and for prolonged treatment trough concentrations should be even lower to prevent toxicity [12]. On the other hand, to prevent development of resistance or treatment failure, too low drug concentrations should be avoided. As a target for efficacy, an area under the concentration-time curve (AUC) to the minimal inhibitory concentration (MIC) ratio of at least 119 has been established [13]. To facilitate TDM there is a need for a simple assay suitable for TB endemic areas. As linezolid is a core drug for MDR-TB, it has been recommended that access to assays should be available at regional level to facilitate a short turn-around time and reduce sample shipment [14]. To operate assays at a regional level in high burdened TB countries, challenges regarding procurement costs, availability of skilled laboratory scientists, and sample logistics need to be overcome.
Several analytical methods for linezolid estimation in plasma, serum, saliva, and dried blood spot have been described in literature [15-20]. Most of them use a chromatographic separation of analytes followed by diverse methods of detection like UV spectrophotometry or tandem mass spectrometry. Compared to high-performance liquid chromatography (HPLC), liquid chromatography-tandem mass spectrometry (LC-MS/MS) is quite expensive, requires more skilled laboratory scientists, and requires a more advanced and reliable laboratory infrastructure (e.g. collision gas for the mass spectrometry). These may not be affordable or available in resource-poor settings [15]. HPLC methods for the determination of LZD in plasma and saliva were also reported [16-20]. Since LZD is used in combination with at least 3 other second-line anti-TB drugs and several other drugs in case of co-morbidities like diabetes or co-infections like HIV, it is essential to establish the specificity of the analytical method in order to rule out interference of these drugs in the estimation of LZD in plasma before it can be used in clinical practice. Therefore, we developed and validated a simple, selective, and sensitive HPLC method for the determination of LZD in plasma, to facilitate routine TDM in MDR-TB programmatic treatment.

The HPLC system, Prominence 1 (Shimadzu Corporation, Kyoto, Japan) comprised of two pumps (LC-2030-3D), photodiode array detector (SPD-20AV) with built-in autosampler and system controller. Data collection and acquisition were carried out using Shimadzu Lab solution software. LiChrospher 100, Lichro CART 250-4 RP18 e (5µm) particle size (Merck, Germany) was used as the analytical column. An isocratic mobile phase was prepared by mixing 0.1% formic acid in 1000 ml of water and acetonitrile in the ratio of 60:40 (v/v). The solvents were degassed individually using a Millipore vacuum pump before preparing the mobile phase. Each chromatogram was run for 5 minutes at a flow rate of 1.0 ml/min at 40°C, with the PDA detector set at a wavelength of 254 nm. Unknown concentrations were calculated from linear regression analysis vs LZD concentration curve; linearity was verified using estimates of correlation coefficient (r).

To prepare a stock solution (1mg/ml), LZD was dissolved in Milli-Q water. Working standard concentrations ranging from 0.50 to 20 µg/ml were freshly prepared in pooled plasma by spiking with the stock solution. These concentrations span the range of clinical interest for commonly prescribed dose for LZD for MDR-TB [11].

To 100 µl of each of the calibration standards and test plasma samples, 200 µl of acetonitrile was added and mixed vigorously on a vortex mixer, followed by centrifugation at 6720 x g for 10 min. The clear supernatant (200 µl) was evaporated in a nitrogen evaporator to dryness at room temperature. The dried residue was reconstituted in 100 µl of the mobile phase and 50 µl was injected into the HPLC column.

The method described was applied to the determination of LZD concentration in plasma from 5 patients who are treated with a dose of 600 mg LZD along with other second-line anti-TB drugs in an ongoing clinical study at NIRT (IEC no. 2018017). Serial venous blood samples were collected at pre-dose and at 1, 2, 4, 6, 8,12, and 24 hours after drug administration. Blood samples were centrifuged at 3500 x g and plasma was stored at -80°C until analyses. 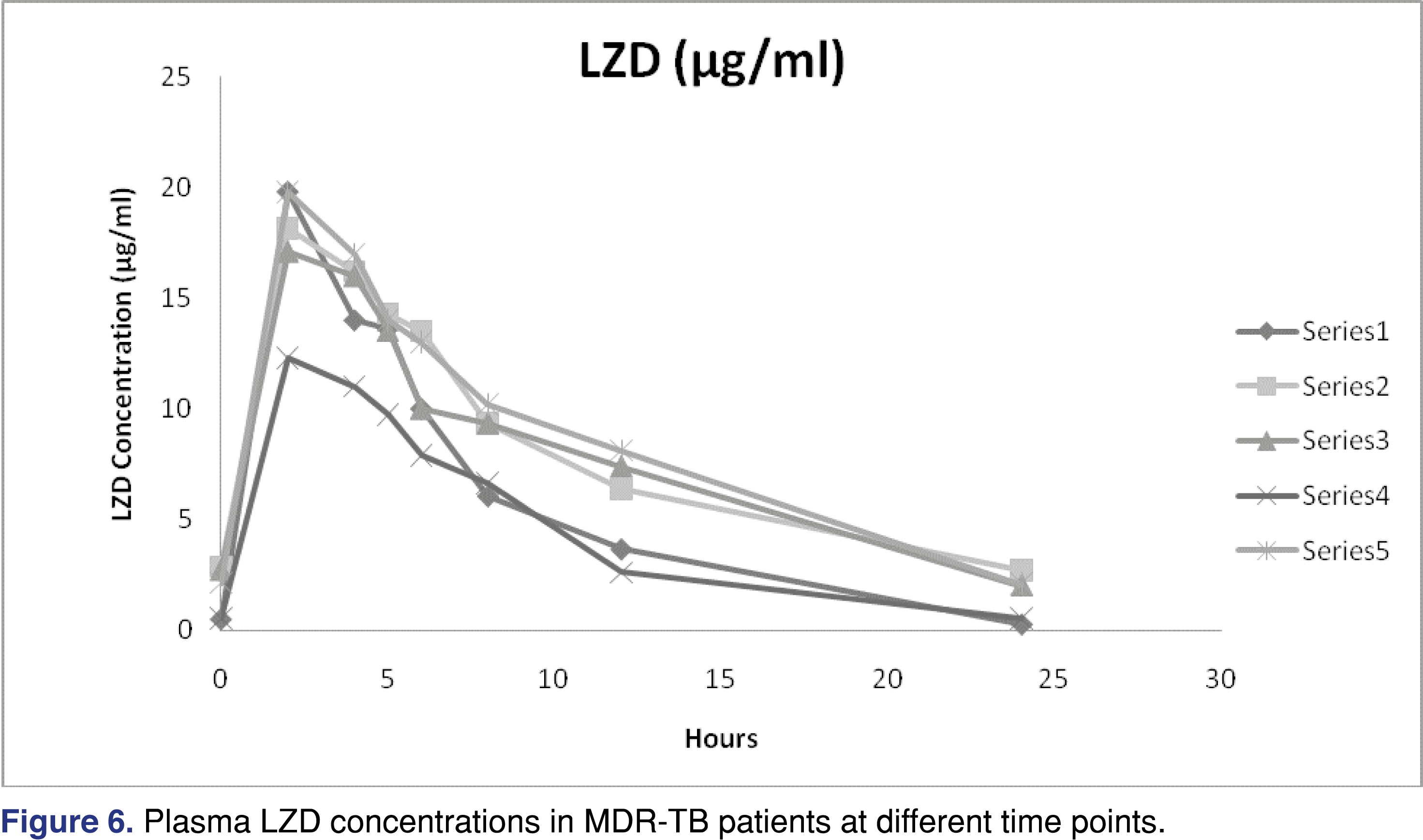 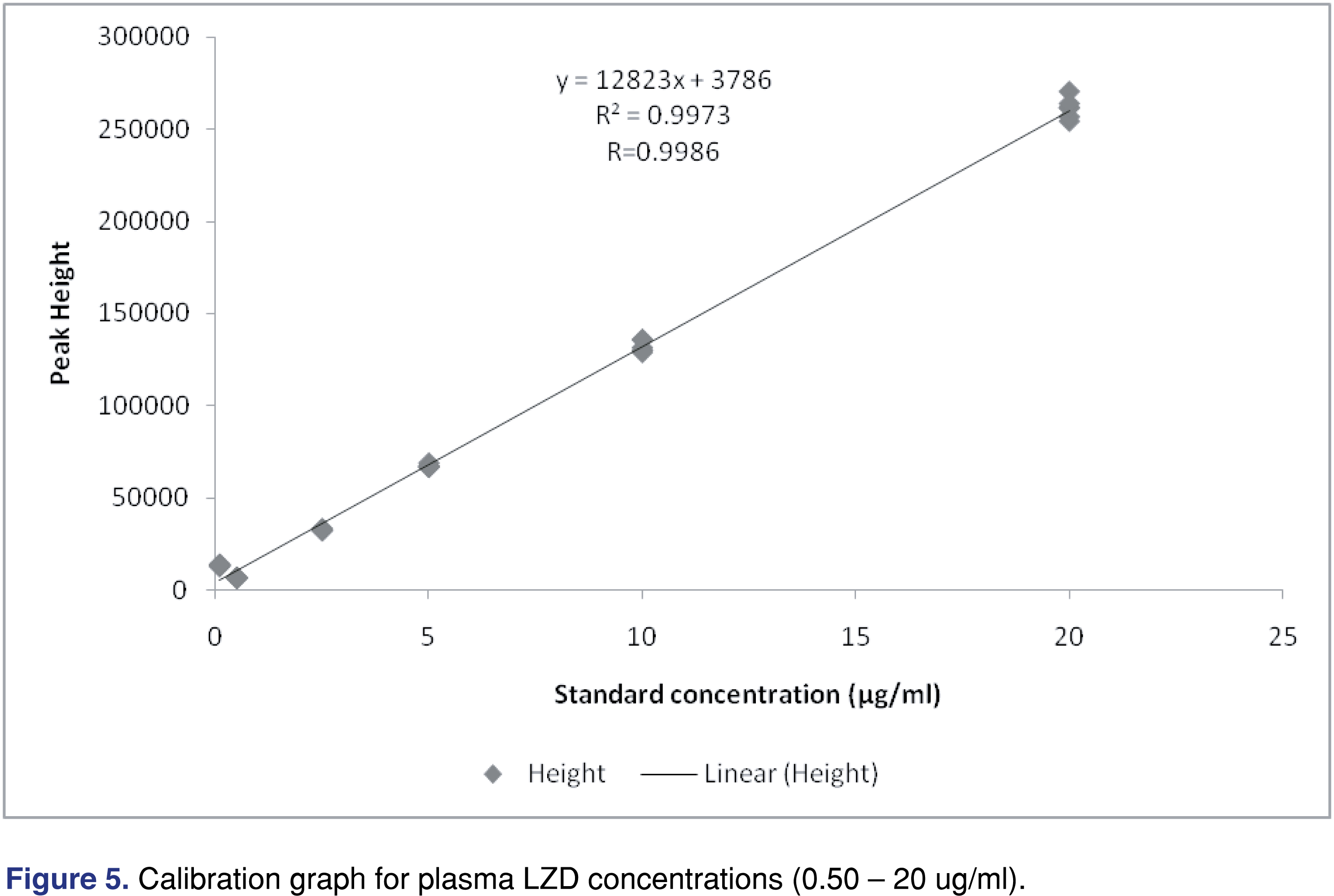 LZD was well separated and seen as a discrete peak. The representative chromatograms of extracted LZD standards 20.0 and 0.50 µg/ml and an extracted plasma sample from MDR-TB patient are given in (Figures 1–3) with a retention time of 3.1 min. Blank plasma sample did not give any peak at the retention time of LZD (Figure 4).
In the present method, LZD concentrations ranging from 0.50 to 20.0 µg/ml were checked for linearity. Calibration curve parameters of LZD from six individual experiments for standard concentrations ranging from 0.50 to 20.0 µg/ml showed a linear relationship (Figure 5). The mean correlation coefficient (R), coefficient of determinants (R2), slope and intercept values were 0.9986, 0.9973, 12823, and 3786 respectively. The linearity and reproducibility of the various standards used for constructing calibration graphs for plasma LZD were given in Table 1. The intra- and inter-day relative standard deviation for standards containing 0.50 – 20.0 µg/ml ranged from 2.49% to 4.58% and 1.17% to 3.68 % respectively.
The accuracy of plasma LZD concentrations ranged from 98 to 101%. The precision of the method was further evaluated by analyzing plasma samples containing different concentrations of LZD with corresponding RSD ranging from 1.41 to 3.21% and the method reliably eliminated interfering materials from plasma, yielding a recovery of LZD that ranged from 96% to 101% (Table 2). The LOD and LOQ estimated mathematically from the standard curve equation were 0.25 and 0.50 µg/ml respectively.

Although LC-MS/MS is considered the preferred platform for routine TDM because of the sensitivity and specificity, the instrument is neither affordable nor feasible to operate in many resource-poor settings. As costs and availability of chemicals and reagents are keys in low-resourced settings, we included these considerations in our method development. Therefore, we developed a method for the estimation of LZD using an affordable HPLC-UV system with the linearity ranging from 0.50 µg/ml to 20 µg/ml suitable for clinical practice. Having a very low LOQ is not relevant for most drugs when applying an assay for therapeutic doses as concentrations will be much higher at a therapeutic dose at steady-state conditions. The proposed method requires 100 µl of plasma when compared to other methods where the plasma sample of 200 µl is required allowing for standardization in the lab which reduces the need for multiple precise pipettes and corresponding consumables. The HPLC method described by Shuuji Hara et al. used a mixture of acetonitrile, tetrahydrofuran, and ammonium acetate buffer as the mobile phase [16]. We applied a similar strategy for the selection of the column, i.e. a simple C18 column, to avoid the need for more expensive columns as described earlier [17]. The sample preparation in the developed method was also very simple involving single-step protein precipitation with acetonitrile. Protein precipitation can be preferred over liquid-liquid extraction using ethyl acetate [18] as it was faster which allows for routine TDM in high burdened TB settings. The use of methanol and dichloromethane liquid-liquid extraction may improve the sensitivity of the method as had been shown earlier by Traunmuller and colleagues [19]. The LOQ of their assay was 0.05 µg/ml which is 10-fold lower than our assay. However, such a low LOQ is not required for the intended purpose of TDM in MDR-TB treatment as linezolid trough concentrations typically range between 2-8 µg/ml [11,12].
Fortuna et al., used solid-phase extraction cartridges which also resulted in a lower LOQ but was time-consuming, increased cost [17]. In case of backorders and unreliable logistics of consumables, every additional step increases the risk of not being able to run the assay routinely. Our assay had a relatively short runtime with the retention time of LZD being 3.1 minutes thereby facilitating to process a large number of samples.
We did not perform an extensive sample stability study as linezolid stability in plasma and serum has been extensively studied, including freeze-thaw cycle [22] showing that linezolid samples were stable for at least 36h at room temperature. A study by showed similar results for a test period of 3 days at room temperature (100.5-104.0%) [17]. Samples could also be stored for 60 days in the refrigerator without any concern for stability (102.6 ± 0.7%) reducing the need for more expensive storage at -80°C [23]. Plasma spiked standards and samples collected from the patients were stored at -80°C and found to be stable for more than 30 days.
Although we tested a significant number of potential drugs that are typically co-administered it could happen that patients use other drugs that have not been included in the inference test. Routine TDM of linezolid does not require a complete pharmacokinetic profile as we carried out in our study, but by collecting samples at trough and peak levels to calculate an AUC [24].

This RP-HPLC method for assay of LZD in plasma was developed and validated. This method spans the relevant clinical range for LZD (0.50-20.0 µg/ml) and was specific, simple, and rapid. The developed method may be suitable for the determination of plasma LZD in routine practice and considered feasible in less-resourced settings.